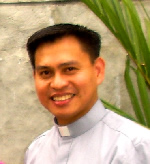 (author of ARISE AND WALK and MENDING A BROKEN SOCIETY)

He was born in Davao City (Philippines) on December 18, 1968. A secular priest incardinated in the Prelature of Opus Dei, he obtained his Bachelor’s degree in Sacred Theology at the University of Navarre in Pamplona, Spain, and his Licentiate and Doctorate in Canon Law (Summa cum laude) at the Pontifical University of the Holy Cross in Rome, where he was ordained priest on March 28, 2000. Mending A Broken Society is the third major work of the author, following the publication of two other volumes: Diplomatic Relations between the Holy See and the State of Israel (Rome, 2003), a historical-juridical study, and Arise and Walk (Manila, 2007), a spiritual-inspirational book that has received numerous positive reviews. The Audio-CD version of Arise and Walk was nominated and won a special citation from The Catholic Mass Media Awards (2011). Before receiving the Sacrament of the Holy Orders, Fr. Bocala had worked as a freelance writer and an aide to a Senator in the Philippine Congress. A Political Science graduate of the University of the Philippines (UP), he entered the UP College of Law, but later shifted to ecclesiastical studies. He is also a seasoned painter and has joined several art exhibits. He won the design competition for the official logo of the 10th World Youth Day (Manila, 1995), an event highlighted by the visit of Pope John Paul II. Since his ordination to the priesthood, Fr. Bocala has been working full-time in pastoral tasks among students and young professionals. He has carried out priestly ministry in Spain, Italy, South Africa, Israel and was the Chaplain of Warrane College at the University of New South Wales in Sydney (Australia) before coming back to the Philippines.