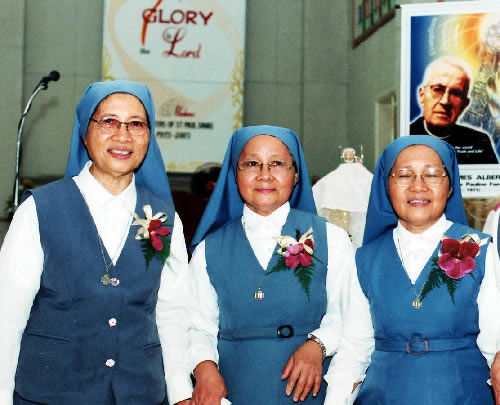 Thank You, Lord, for Our Parents

Srs. Eugenia, Giacinta and Fatima Gornis are blood sisters. They came from a family of five girls. Srs. Giacinta and Fatima are identical twins. All three of them were generously offered by their parents to God by becoming the Daughters of St. Paul. 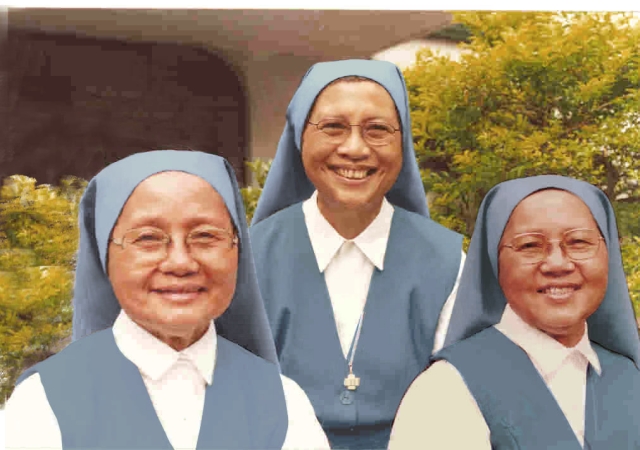 Sr. Giacinta and I entered the community of the Daughters of St. Paul in Davao City. Our entrance was postponed for a week because our Founder who is now Blessed James Alberione and his Co-Foundress, Sr. Thecla Merlo came to visit the community. We address them as Primo Maestro and Prima Maestra respectively.

At the airport, we were introduced to the Primo Maestro and the Prima Maestra when we gave them the leis of sampaguita. In turn, the Primo Maestro gave us his blessing. According to the sisters, he also gave a special blessing to our family.

When we finally entered on May 14, 1955, we were thrilled to have been given the same room where the Primo Maestro stayed. After one month, we left for the mother-house in Manila.

I happened to know the Daughters of St. Paul through my mother, when she bought a book entitled “Miss Filipina” as a gift for our birthday. On the last page of the book is an invitation to young girls to join them. My mother told us that the Sister who served her at the book center was very friendly and that she made the mission in mama’s hometown in Southern Leyte. After having known the Sisters, we often dropped by their place to buy pamphlets and stampitas. The Sisters also visited our house and they used to take lunch with us whenever they did the mission in our area.

When we asked permission from our parents, there was no resistance on their part. They were God-fearing and all they wanted in life was to abide by whatever plan God has for each one of us. Since we are all girls, our parents wanted us to grow up respectable and with good education to prepare us for life. My mother said that she had prayed much for us and had concluded that our desire to become Sisters must have been the answer to her prayers. However, she had one special request to the superior: Not to separate us twins in our assignments because we usually get sick when we are separated.

The only obstacle to my entrance was my health. I was found to have a spot in my lungs, but thanks be to God, my lungs were cleared after a month of treatment and rest.

We felt at home in the convent. We did not miss our mother so much because Sr. Cleofe was very caring. After our profession, Sr. Cleofe sent both us to Taiwan as missionaries. She heeded my mother’s request as both of us were sent to the same place.

Sr. Giacy and I served in Taipei and Kaohsiung from 1961 to 1983. To be able to communicate with the Chinese people, we studied Mandarin at the Taiwan Normal University Mandarin Center and in Fu Jen Catholic University. Aside from our media centers, we also visited families, schools and offices.

Our greatest joy in the mission is to be able to leave a copy of the Gospel or the New Testament in a home, even just one copy every day.

While in Taiwan, we came home several times to visit our families. In 1983, we returned home for good. Sr. Giacinta is now in Cebu while I am presently in Tacloban. We are very happy in our vocation and we never regretted for having been offered to the Lord by our parents. 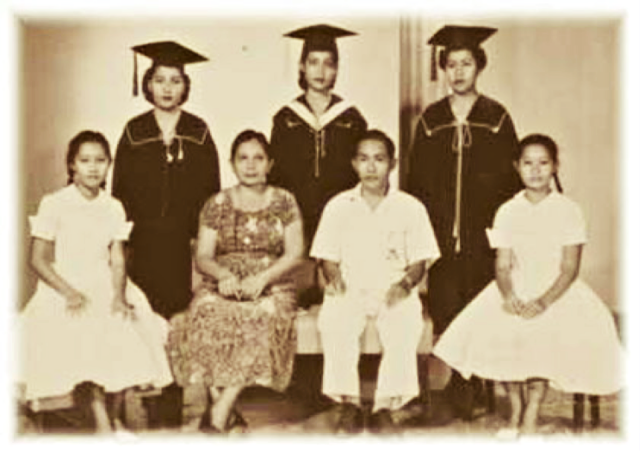 So, just like my youngest twin sisters, Sr. M. Fatima and Sr. M. Giacinta, I also have a twin sister, my vocation. But I did not realize this until my mother met Sr. Gaetanina, the pioneer of the Daughters of St. Paul in Davao. My mother was impressed with the friendliness of Sr. Gaetanina, and the simplicity and joyful spirit that she exuded. Above all, it was her pair of beautiful blue eyes that spoke so much. And so Mama told me to go and see her. I went, pretending to buy a crucifix. I found her to be different from the “Madre” I used to know in my pre-school years, who was strict and stern-looking. But Sr. Gaetanina was just the opposite. Since then my heart softened towards “Madre”.

Looking back from a distance of more than four decades since my entrance, I see four significant contributing factors to my becoming a Daughters of St. Paul: my God-fearing and prayerful parents, the disciplined upbringing in the family, the faith and courage of my parents to look for a greener pasture in Davao, and of course, my response.

Once, in our family chit-chat, Mama told us that even on the eve of her wedding, her prayer was to be able to follow the will of God. She asked the Lord for sign so that just in case she and Papa were not meant for each other, she would immediately call off the wedding. Surely no sign showed up.

At the start and end of each school year, Mama used to gather us all for the nine-day novena to the Holy Spirit so that we would do good in our studies and to thank the Holy Spirit for His gifts and enlightenment for the past year. On the other hand, Papa’s fidelity to his commitments and promptness for Sunday Mass and in reporting for work is admirable. Ten to fifteen minutes before Mass, Papa was already in church. He was never late for work as a medical technician at the City Health office. For this, he received a plaque of appreciation.

As a member of the “Adoracion Nocturna Movement”, Papa was faithful in making his midnight adoration every first Friday of the month for 25 successive years. He told us that he was offering this for our perseverance. But even after 25 years, when midnight adoration was no longer obligatory for him, he still went until he was old and weak.

Mama and Papa also used to pray the “Prayer for those who thirst for souls as Jesus does.” They prayed it every day for our perseverance. With such God-fearing parents, it is no wonder we did not have any difficulty in having their permission to enter the convent. In fact, after the twins entered the convent, I overheard a part of their conversation, “If we did not allow them to go, it will be our responsibility before God.”

This disposition of my parents gave me courage to pursue my plan of following after my two twin sisters. However, knowing how much sacrifice they have undergone after the twins left, I was afraid to break their hearts if I told them directly. So, I gave hints whenever there was an occasion. When I received a beautiful sleeping mat as a gift, I would say, “Oh, I will bring this with me when I enter the convent.” After sometime, when my intention became obvious to them, Mama finally asked me, “Are you really serious in your plan to enter the convent?” I said “Yes”. Mama made a bargain: I enter the Convent of the Dominican Sisters who are running the San Pedro Hospital in Sta. Ana Parish so that it would be easy for her to visit me and that I could care for them when they would get sick. But I had already decided to join the Daughters of St. Paul because I wanted to become a missionary.

Discipline in our family was not done through the use of rod but through constant motivations to do things right: in religious practices, in studies, in work and in observance of religious and family values, especially HONESTY. I thank my parents for their adventure to settle in Davao. Had they remained in Southern Leyte where Mama came from, perhaps I would not have met the Daughters of St. Paul during my youth.

As a blooming young lady, I was the object of attention to some young “butterflies”. For a short time, I entertained one. When time to make a decision, the pull of religious vocation was much stronger than family life.

As a growing child, it never occurred to me that I would later become a nun. But I am sure that the seed of vocation was already implanted in me. It was my mother who made it sprout by directing me to see Sr. Gaetanina. It was the ambience of good example, wholesome family relationship and prayerful accompaniment of my parents that had allowed the seed of my vocation to sprout, grow and mature.