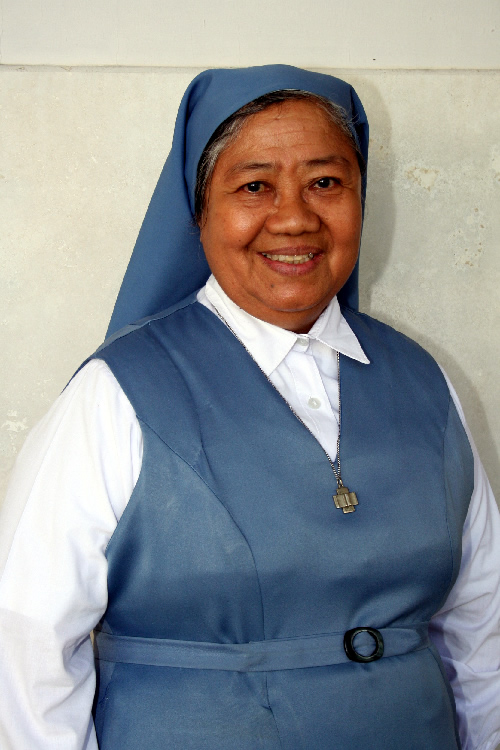 To the Daughters of St. Paul through St. Joseph

I believe that my religious vocation has been nurtured by God in me through my parents. Their good lives and examples had opened my young mind to the love and fear of God. We were so disciplined that before six o’clock in the afternoon we must be at home for the Angelus. We prayed the rosary after supper and on Sundays we had to attend Mass in the morning and the catechism class in the afternoon. After my fourth grade, they sent me to have my fifth and sixth grade in a Catholic school in Naga City, two hours ride from my town.

But the first time I heard the word “sisterhood” was when I was in first year high school in a Catholic school in Manila. It gradually changed my behavior. So when I went home for Christmas vacation my aunt noticed that I was no longer the playful one who would get even with my male cousins in their games. She watched my every move. When I was greeting everyone for my trip back to Manila my aunt said, “You, don’t you ever think of becoming a Sister!” Just to get even with her I said, “Well, if I enter the convent, I will never go out.”

Before the end of that school year, all students from first year to fourth year had to make a three-day retreat. It was my first time to experience that and our retreat master was a Redemptorist priest. He had to be creative in order to keep the students awake. He taught us a ritual of crossing our arms on our breast, the right arm over the heart, and the left arm on the opposite side. He asked us to imagine that our Mother of Perpetual Help was at our right and the Guardian Angel at our left. Then we prayed, “Lord, I do not know when, where and how I will die and if I die in mortal sin, I will go to hell.” He told us that Mother Mary and the Guardian Angel will help us avoid hell. So we must pray three Hail Mary’s and the prayer to the Guardian Angel before going to bed. I was fascinated by this practice and I continued to do the ritual before sleeping. While doing it one night I remembered my conversation with my aunt and I began to think about the Sisters. Shall I become a Sister? What does a Sister do?

Curious but truly interested I started to observe the Sisters in my school. They attend the six o’clock Mass, make long prayers, teach, converse, and so on. To imitate them I then began to attend also the six o’clock Mass, prayed the rosary after class, made the Stations of the Cross and attended the Wednesday novena to our Mother of Perpetual Help. I was also helped by a very dedicated Jesuit priest, who was always available for the weekly confession in their old chapel at Padre Faura. I then believed I was following the right track. My high school days were colored with many beautiful memories that helped me grow in my religious vocation. When I entered college, I did not have enough time for my usual practices of piety, but I continued the daily Mass and remained in frequent contact with my spiritual director. The Lord took care of the rest.

On Ash Wednesday of 1958, I renewed my Lenten resolution to offer some sacrifices for the Lord: (1) No movies for seven weeks until Easter, since I could not let a week pass without watching a movie, (2) No green mangoes with bagoong which were abundant along the sidewalk. While making the Stations of the Cross with my co-parishioners at Ermita on that day, I talked with God, “Lord, if I am for the religious life, may I enter at the age of twenty. But if I am for the married state, I will marry at twenty-five.” I also prayed to Mama Mary and to St. Joseph, who always helped me in time of need.

The next day I went to Libreria San Pablo at Azcarraga, now Recto Avenue, to buy a novena to St. Joseph. I took the Seven Sundays novena, which means that I would finish it at Easter time. In my daily Mass within the nine weeks, I always knelt in front of the image of St. Joseph. After communion, I always added a prayer to St. Joseph, “Obtain for me the state of life where I can serve God best. May I meet my partner in life at the communion rail.” Then one time, after communion, after talking to St. Joseph, I seemed to hear him say, “It is he whom you have just received.” I reflected for some moments and I understood then that I was meant for the religious life but I did not know yet what to do. I did not know which congregation I should enter and how.

Easter Sunday came. Visiting relatives and friends was a tradition. Late in the afternoon two male friends also came and our conversation ended up in serious talks about our vocation. One of them had attended a Lenten retreat with the Jesuits at Novaliches. His companion jokingly said, “D and I will become priests. M and Teresa will enter sisterhood.” I immediately answered, “I will take the challenge, and I will enter the convent.” We all laughed, but I felt irritated and even insulted when the group left.

When I entered my room I saw the novena to St. Joseph and remembering that I still had one Sunday to finish it, I prayed it hurriedly. At the end of the novena booklet was an extra page with an invitation. What struck me were the words, “How about you, would you not want to give your talents to the Lord?” I immediately took the address and applied to the congregation being advertised.

After only one week I received the answer signed by the superior. I was being called for a brief interview. When I came to the place, I realized for the first time that I had been passing that route from Ermita to Baclaran for my Wednesday novenas to our Mother of Perpetual Help, but I never noticed the signboard: Daughters of St. Paul, 2650 F. B. Harrison. After my interview, the Sister superior instructed me to attend the retreat for the applicants and she told me, “If you correspond to the grace of God now, all other graces will follow.”

I entered on June 21, 1958, four days after my 20th birthday. It was the Lord’s answer to my prayer. My mother, brother and sisters accompanied me. While the sisters were entertaining my brother and sisters, my mother took me aside and led me to the chapel. She asked me to kneel and gave me her blessing. My formation that followed was happy and memorable. The years past swiftly and after four years I was ready to make my first religious profession.

My family went to Lipa to witness my profession of vows. Before the ceremony my mother embraced me and said, “now that you are going ahead in that vocation, who will take care of me when I grow old?” I did not know what to answer her. I was facing the tabernacle and I asked the Lord what to say. And the Lord said, He will take care of her. “Inay, God will take care of you.” Slowly she released her arms and said, “That’s okay, don’t ever think of leaving the convent.”

Looking back at the countless graces I received during those past forty-four years of my religious life, I am grateful to God and for all He has done for me and for my family. I still remember the words of the Sister superior.

I am also very grateful to St. Joseph for the part he had played in my choice of a religious family. Without him I could not have known the Daughters of St. Paul.

At present, Sr. Bert is serving in Pasay City.