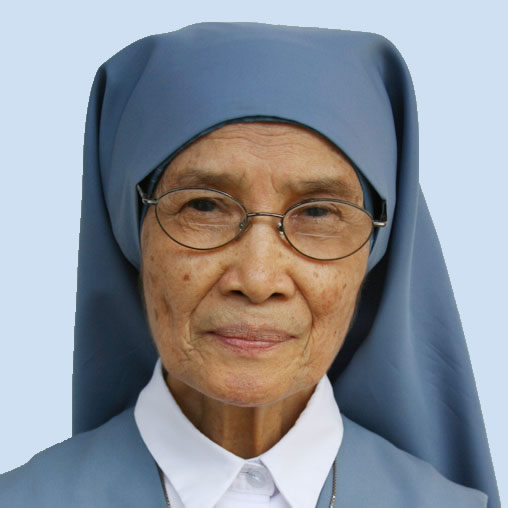 I believe that the Lord has chosen me even from my mother’s womb. At a very tender age, I felt I was being called to a life different from the ordinary. I was particularly attracted to some nuns. I told myself that I would be like them when I grew up because I had a belief that nuns are holy and do not commit sin. I would act like a nun by covering my head with a towel and then would kneel in silent prayer. When my sister entered the convent of St. Paul the Chartres my childhood desire was inflamed. Unfortunately, she got sick when she was a novice and later came home.

When war broke out in 1941, my widowed mother decided to transfer from Pampanga, the home province of my father, to Manila. This was a blessing for me for I could attend daily Mass in Quiapo church. it was here where I met Floria Perez (now Sr. Paola) and we became friends. But then one day, she did not appear. I inquired and found out that she had joined the Daughters of St. Paul. I was so inspired to follow her so I also applied and was admitted.

Religious formation in those days was very strict. One morning I did not eat the marmalade that was served because it was mixed with orange rind so it was bitter. But the superior learned about it and I was reprimanded. Fearing to be sent out, I swallowed the marmalade and learned my lesson. Beginning that time, I did not complain of the food any more.

After the war, we found ourselves in Bauan, Batangas. We received the habit afterwards and we became diffusers of the word of God. Surprisingly, in 1947, we were called to make the novitiate in Rome. There was no direct boat to Italy so we passed the United States and stayed there for eight months, spreading books in offices and homes.

Our life in Rome was very blessed. We had the grace to see often Mother Thecla and Father Alberione. We also spoke with them. After profession in 1948 we came back to the Philippines and became fulltime missionaries of the good press.

From Lipa I was later sent to our community in Dominga Street, Pasay. We were so happy doing our mission when God surprised us again. Sr. Paola and I were asked to be missionaries to India. We cried, but we went.

India is a non-Christian nation. We encountered many difficulties but we survived because we trusted in God’s help. I cannot forget my missionary experiences in India among the Muslims and the Hindus. When we knocked at their door, they would not answer. Sometimes as soon as they opened their door and see us, they would immediately slam the door on our faces. But God was truly with us. We had always enough rupees for fare to go home even when we did not spread any book. I really thanked God that instead of getting discouraged, my love for our mission increased.

In 1970, I came back to the Philippines for good. I was given various duties and was assigned in several places. On March 19, 1998 I celebrated my Golden Jubilee in Pasay City. New, I am assigned in Iloilo and I am happy that I am a religious. I thank God for having chosen me to this beautiful kind of life and I wish to invite young girls to experience and share my joy.