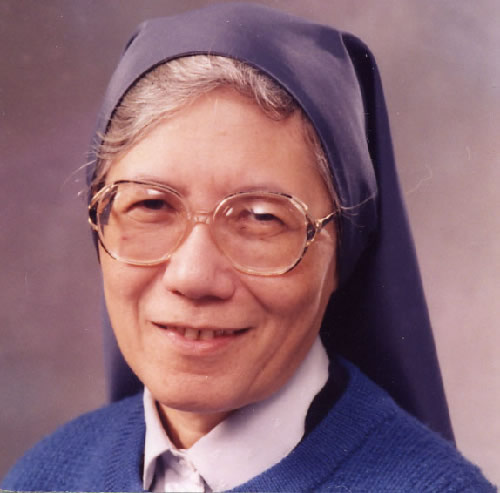 Sr. M. Veritas Grau was one of the extraordinary characters that adorned the Congregation of the Daughters of St. Paul. Born of the late Cesareo Grau, an executive of the Phil-Am Life Insurance Company and the late Carlosa Aguila, a pharmacist, she did not consider her being from a well-to-do family a hindrance to her vocation to profess the vows of chastity, poverty and obedience. Her death on May 30, 2004 due to cancer of the bone marrow was both a loss and a triumph.

Sr. Veritas was Lita to us. I could never call her “Sr. Veritas.” I would like to imagine that when she was born, she already held a book in her hands. She looked and was so much like my mother, in spirit, intelligence and interest; and I might add, a very strong will. They devoured books with great passion. So, Tolkien, C.S.Lewis, Carl Jung were part of the early reading endeavors.

The eldest among us and the only girl at that, she was my parents’ dream child, a kind and lovable sister, an excellent role model. But the power and will behind that frail body of hers could not be taken for granted. Her seriousness convinced us that someday she would be an old maid who would take care of our children. But she had other plans. She was conservative and never frivolous particularly with the use of any cosmetics.

And so her 18th birthday became an ordeal. She pouted whenever they practiced how to walk wearing an uncomfortable voluminous gown which she would wear for her debut; or learning how to waltz with Dad and us.

On the other hand, she beat us to a pulp by being always on top of her class. Accelerated several times, she graduated from high school at age 14 in St. Scholastica and continued her college there where she also taught afterwards. She received a full scholarship and took her masters at Catholic University in Maryland and would often mention that the actor Jon Voight was her classmate in film class.

I remember coming home from school one night and my Mom informing me that Lita had decided to enter the convent. It was one of those nights with a full moon, no clouds with all the stars visible; a night that one is happy to be alive. I walked out alone into the garden and it was one of the few times in my life that I cried like a baby.

On May 26, 1962, she entered the convent of the Daughters of St. Paul, where she thought she could serve God best communicating her love of God through her writings and by being a formator for life. But she did much, much more than that.

When she left, our home became the quietest place mainly because of my parents’ grief. Mom would daily spray her favorite cologne “Blue Grass” on Lita’s bed and clothes till she ran out of it; and would not let the maids rearrange her room. But we all got over that in time.

Then, visiting days were allowed. They became days of obligation even when we were married. Our children roamed around the compound when there was only the main building and the chapel.

Through all these times, it was clear that she had found her calling. I am sure she had her bad moments but her strong will carried her through. When I talked to her doctor, he confirmed what I already knew – her strong will. Strong will, true believer and defender of the faith – qualities that one incident clearly showed. I remember when she visited me in New York some years back, and I thought the best way for her to see New York was for us to go on a tour bus with all those tourists and a professional guide.

Somewhere in mid-town, we turned into a street with a tremendous church. it was an Anglican church which the guide proudly announced was St. James, the largest cathedral in the world. Lita, this tiny woman in her nun’s habit, raised her hand and in a loud voice told the guide, “You’re wrong, St. Peter’s is the biggest!”

I would never have dared to do that with all those foreign tourists around. The guide looked at her and told Lita that she was wrong, “St. Peter is a basilica and this is a cathedral, and it is the largest cathedral in the world.” Lita kept quiet and it was one time she was wrong. But then, thinking back, it was not about religion. It was about architecture and she was not that good about architecture.

I never dared to debate with her on religion. She had this faith and qualities which enabled her to join the order.

It is not easy to summarize Sr. Veritas’ rich years as a Daughter of St. Paul in just a few lines. She entered the Congregation on May 26, 1962. As she already held a degree in English literature, she was immediately put to serve in the publishing sector of the apostolate. She made her first profession three years later, followed by her perpetual profession five years later.

In addition to her responsibilities in the publishing sector, she also taught the young sisters and in-charge of vocation work. For six years, she served as a provincial councilor and formator of the postulants and juniors. In 1977, she became a General Councilor and served the entire Congregation for twelve consecutive years.

Fully convinced of the need to prepare our Sister-formators, she dedicated herself with great love and competence to organizing and accompanying courses for these formators. She tirelessly animated our Sisters spiritually even in various parts of Asia, Africa, Australia and the Americas. Her rich contribution of wisdom and the strong charismatic color she imparted to all her conferences, including Chapter commissions, are unforgettable.

Sr. Veritas was diagnosed to be suffering from cancer of the bone marrow in 1998. The cancer became more and more serious over the years amidst treatment. Sr. Veritas suffered many critical moments but always came out of them even more alive and strong. This could only be attributed to her strong will to live to continue the formative work she believed she had to accomplish for the good of the congregation.

Deeply loved by all her sisters, Sr. Veritas was their reference point and teacher, especially in these last years of her illness, during which she offered them the example of how to lovingly offer oneself to God with full awareness of the supreme sacrifice being asked. Up to the very end, she was teacher and guide who showed everyone the way to the one Master, Jesus the Christ.