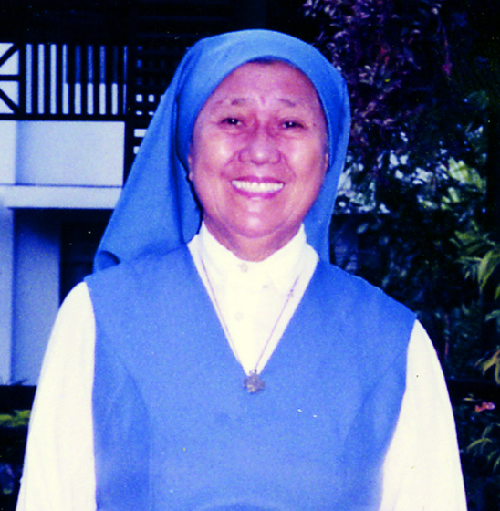 The Flowering of a Vocation

Sr. M. Regina Placida Caro (right) believed she was called by God from her tender age of seven. The magnetic attraction of the God-man present in the Blessed Sacrament pulled her closer to Him from the moment she learned from her catechism classes that Jesus is truly present body and blood, soul and divinity in the tabernacle. Her joy in receiving Jesus and her closeness to the Eucharist increased as the years wore on.

Before going to college, Placida taught for two years in an elementary school in Calubian, Leyte, her hometown. During faculty meetings she would slip out and visit the Blessed Sacrament. When confronted about her absences, she would reason out that the great God and Creator was lonely so she visited Him. Coupled with this love for God was the devotion to the Blessed Virgin Mary. These devotions rewarded her with a religious vocation.

When Placida was a student at the University of San Carlos, Cebu City, she found herself scouting for a religious congregation. She was drawn to the Carmelites as she wanted to follow St. Therese of Lisieux, her favorite saint, but God had other plans for her. A classmate led her to the Daughters of St. Paul. The then superior, Sr. Melania Ravarotto, posed to her a challenge, when she said she wanted first to earn a college degree before entering the convent, “Your degree will not help you go to Heaven. While there is still time, take the opportunity to follow God, otherwise your vocation will fly away never to return.”

With great hesitation she told her parents about her plans. Her father did not block her way, but her mother did. In fact, it took 15 long years before she reconciled with her daughter. Her father confessor was also against it. “Why do you want to join a company of nuns who roam around and sell books?” In response, she told him, “No way, if Protestants are gaining recruits through reading materials, why couldn’t I do the same to prevent the faithful from falling away?”

November 21, 1942 found Placida sailing alone towards Manila. From Manila she went to Lipa City, to the motherhouse and novitiate of the Daughters of St. Paul. The day after her arrival, Sr. M. Cleofe Zanoni, the superior of the community ked her how she was faring. She cried out with outstretched hands, as if in supplication, “I am happy!” Certainly a different kind of happiness had crept into her heart in her new-found life.

During the years of initial formation, unpleasant events were not lacking. Little misunderstandings, little discomforts were little crosses to bear, but they did not dampen her enthusiasm to go ahead. Not even her sometimes swollen knees would be the obstacles. Years back, her doctor had forbidden her to kneel. In the convent where she entered, one must not only kneel but even walk. The apostolate of the Daughters of St. Paul requires one to visit families with a bag of heavy books. As a novice, she was sent for this mission once a week which proved a big trial for her. Far from getting discouraged, that trial spurred her on with an unwavering faith to stay put, no matter what.

Placida received the religious habit more than a year after her entrance. On to the novitiate afterwards, she experienced the springtime of religious life, swimming in the vast ocean of graces. The clear water of that ocean never for a moment turned murky, not even by the offer and temptation of a “dolce vita.”

In the novitiate one day, a friend whom Placida had left in Calubian came to visit her. He revealed his sincere feeling towards her, which he said had nagged him since she left her hometown. “Why didn’t he propose earlier?” He added that he could not find peace until he could win the girl he loved. He was financially well-off, handsome and very convincing. Yet, with the same intensity of feeling, Placida turned him down. She told him that she could never leave Jesus even in her wildest and craziest dream.

On March 19, 1517, Placida made her first profession of vows. She was given the name Maria Regina, in honor of the heavenly Queen and Mother. She publicly pronounced the words, “I offer, give and consecrate myself totally to God.” These words would be her battle cry in the future, especially in the midst of difficulties and trials. On March 19, 1962 she made her perpetual profession. Integrated fully into the community, she began her life s a Daughters of St. Paul. Profession meant complete insertion into the life and mission of the Congregation. Without academic degree, biblical or theological preparation, no professionalism and the like, she was immediately immersed in the apostolate of the media of social communication.

Sr. Regina performed various duties in the Congregation: superior, cook, office worker, but she had a great love for book diffusion. She visited offices, stores, military camps, hospitals and families, always wearing a smile that captivated everyone she met. She gained friends and turned them into collaborators in the numerous apostolic projects of the community. She became a “provider” for the Congregation.

It was in this kind of work where her vocation fully blossomed. Faithful to her vows and zealously intent “to do good” she became more humble, dynamic, friendly, joyful and kind. After more than 40 years as happy and prayerful religious she was diagnosed to have cancer. She accepted her sickness and offered all sufferings in union with Christ. Like any religious striving for perfection, she did not in any way claim for extra attention. On May 18, 1999, while vacationing in her hometown, she had her last attack and died. She was remembered with great affection by her family, co-sisters, benefactors and friends. 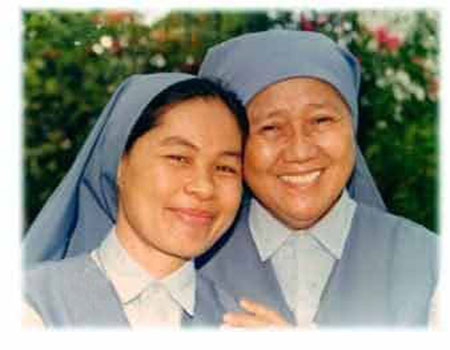 An Entry in Sr. Regina’s Diary:

“While visiting the families in a certain town, we were warned not to enter the white house in the corner of the street. But I remembered the advice of Mother Thecla Merlo, not to miss any house in our home visitation. Cautiously we entered the gate when suddenly three fierce dogs came out as if ready to devour us. When we prayed the “Hail, Holy Queen,” the dogs surprisingly calm down and wagged their tails. But the old man who owned the house was angered to see Sisters inside his premises. He came out limping and asked what we wanted. I explained and showed him the book The Seal of Confession. “How much?” he asked. “Three pesos.” The old man took several coins from his pocket and hurled them my face, hurting particularly my right eye. I picked up the coins, put the book on a stool nearby and left with a smile. Meanwhile my companion, a postulant, was trembling in fear. In the afternoon, I prayed very much for that man. To my surprise, he came to see us in church. when we came face to face with him, my heart was calm, full of forgiveness and even sympathy. He came to ask pardon for his rudeness. He told us that he was a mason but the event miraculously softened his heart. Now he was ready to make peace with the Church. He must have read the book we left him and our prayers must have touched his heart.”