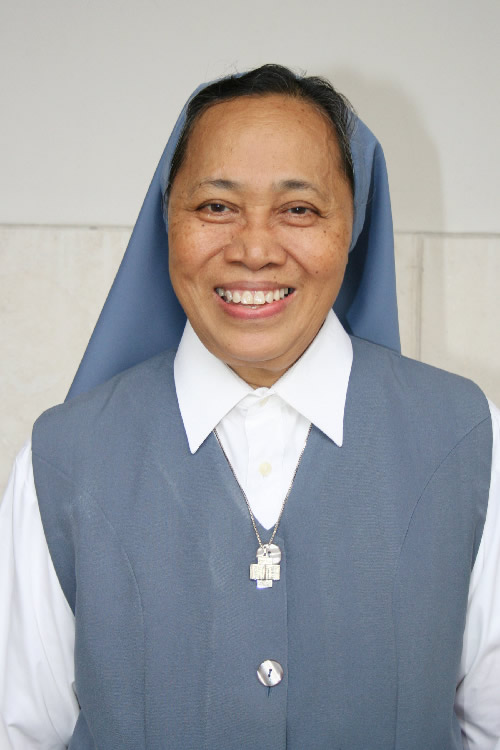 He Set His Eyes on Her

Cecilia Cabucos was two years old when her dear mother died. It was at the height of the Japanese occupation of the Philippines. Since her father was in the army, she was left to the solicitous care of her unmarried aunts. But as soon as he was in the position to bring up his youngest child, he took her to their own home.

Cecilia was the youngest among four girls, but she was not spoilt. It was probably due to the inner desire of her mother to have a baby boy when she was conceiving Cecilia that she grew up with boyish traits. She never played with dolls, but with tops, kites, slingshot and preferred cowboys and war-games.

As a teenager, Cecilia loved outdoor sports, adventures and dances. Nobody ever thought that she would later become a nun. She was in second year high school when she met for the first time the Daughters of St. Paul who came to her school. The indifference and disrespect of her classmates affected her. To compensate for their bad attitude she bought several books from the Sisters.

When the Sisters gave a talk to the fourth year girls, inviting them to become Sisters, she noticed the inattention of the girls and her heart was once again touched. She approached the Sisters after the talk and asked them how she could be a nun like them. But since she was just a sophomore, the Sisters advised her to finish high school first.

Like many girls in her town Cecilia had her boyfriend whom she promised to marry after her college. The boy prepared himself for the most awaited day. He worked hard and tried to construct their future house. Their parents approved of their plans and both parties helped in furnishing the house. Even people in their community acknowledged the perfect match: both were good and mature Christians.

A few years after, Cecilia met the Daughters of St. Paul again. They conducted a Gospel Week in their parish. The parish priest asked her to assign two legionaries for every Sister who would be visiting the families. She herself was among those who accompanied the Sisters in their rounds.

The Sisters’ mission was the first of its kind. They visited the families carrying heavy bags full of Bibles and Gospels. They were tired the whole day but they remained smiling, serene and were seemingly in communion with God. Cecilia was deeply captivated.

Day by day during the Gospel Week her heart grew restless as she went home in the afternoon after the mission. What makes them so happy despite the heavy work? What keeps them in the convent for so long? These were the questions which stirred up in her the desire to imitate them, to also herself to God.

But her other self had different preoccupations: What about her marriage? Her sweetheart who is uniquely religious, loving and kind? How about the house being furnished? How could she explain to them what is going on in her heart?

The Gospel Week experience of Cecilia left an indelible mark in her heart and soul. Each time she thinks of the peace and joy she experienced while they were visiting the families, she wished that mission was for life. How many sleepless nights she had with the merging images of her sweetheart and the joyful faces of the people they visited. She had to decide.

Cecilia waited for the right time but it took a lot of courage and prayers to be able to tell her fiancé and their parents that there would be no wedding and that Someone else had won her heart. They were so unhappy about it.

However, there was one who understood her, and surprisingly it was her fiancé. It was because of his religious background. It was he who introduced Cecilia to the Lord. She did not care much about going to Mass or of doing good to others before. It was this boy who has influenced her and brought her nearer to God.

It was heroic on his part, but he forgave her and gave her the permission to follow her vocation. He could not imagine being God’s rival. In fact he willingly helped her prepare what she needed to enter the convent. Cecilia, meanwhile, was getting more and more immersed in the mysterious and unfathomable love of God. The more her love for God increased, the more her love for her fiancé diminished.

But the other obstacle was not yet vanquished – her father. Being the youngest, Cecilia was her father’s favorite daughter. She was his consolation and soothing balm in his daily fatigue. It would not be easy for him to let go of her for an uncertain journey. When Cecilia told him about her decision, he was furious. “Over my dead body! I must put an end to this foolishness of yours!” He said, “What do you think of religious life? An easy adventure? And with that character of yours?”

As if arranged by Providence, Cecilia’s father got sick and was hospitalized. His children took turns in caring for him. When Cecilia’s turn came, she humbly explained to him the meaning of God’s call and told him of her suffering for not being able to follow her heart’s desire. He was not convinced about it. Instead, he told her to go on with the wedding. Cecilia kept silent, but she knew what to do.

She secretly prepared her papers and her outfit for entrance. On July 16, 1962, on the feast of Our Lady of Mt. Carmel, Cecilia attended Mass and bade farewell to her neighbors as she passed by their window. After the Mass she proceeded to her friend’s house where she kept all the things she needed to bring with her. Accompanied by her elder sister, she entered the convent.

When her father returned from the hospital, he discovered that his daughter had left. He was displeased but he could do nothing. He was only hoping that she could not stay long because of her stubborn character.

But God’s ways are not our ways. He has plans and He wants them accomplished. Cecilia remained firm in her decision to serve God. She was willing to be melted in God’s love and be molded according to His wishes.

It has been 39 years since she joined the Congregation. Never once has she regretted making that decision. At this point in time, she has no other preoccupation than to do the will of God. “May my life be a continuous YES to Him who loves me and who has set his eyes on me.”

Cecilia made her perpetual religious profession on June 29, 1973 and was given the name Sr. Giacomina. She is fondly called Sr. Jackie by her co-sisters. At present, she is assigned at the Paulines Service Center in Pasay City, Metro Manila.