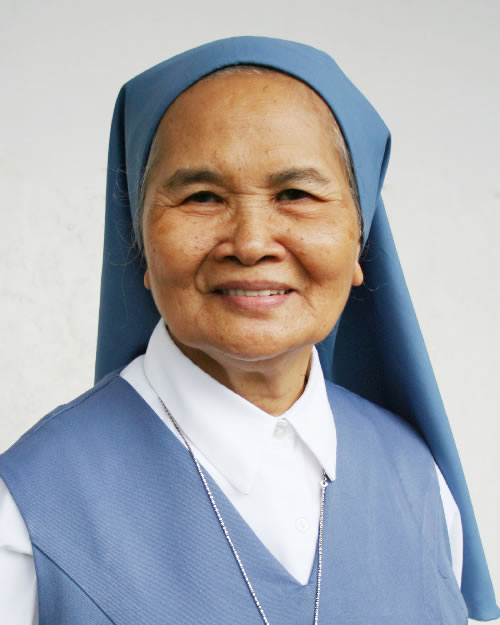 Treasured Memories of my Youth

Vocation to the religious life is a special privilege given by our loving Father. His call is a gift of life. However, it needs a response, a loving response of faith. I never thought I could be a religious, chosen from my family, friends, classmates who were far better than me. For this, I am grateful and I sing forever the glory of God.

I am the eldest child of Mariano and Virginia Guevarra. We were eight in the family: four girls and four boys. We lived in Cabiao, Nueva Ecija where we practiced our simple Catholic faith and cherished, loved and cared for each other. We were blessed with good grandparents who transmitted the love and fear of the Lord to all of us.

The significant person in my vocation is my grandmother who first initiated me to attend the Holy Mass regularly with her as companion, even at the age of four. She took pride in bringing me to church and I always looked forward to it because she had many stories about Jesus and the saints. The one that impressed me most was the suffering Jesus. She told me that He suffers if I am not good, if I disobey or when I tell lies.

As I grew up I had this impression that I must be good so as not to make Jesus suffer. I tried to be good and influenced my sisters to make devotion to the Sacred Heart and join the Sodality of Mary.

I studied in Cabiao elementary and high school, and graduated with recognition. My father was the founder of our provincial high school. My high school years were unforgettable because of my English teacher who was very pious and loving. She always defended me whenever I was late in class because I attended Mass and my father would require excuse slips from late students.

I enjoyed reading books. I was fond of the Catholic Faith by Bishop Morrow, and some religious magazines my father brought home regularly. When Sr. Assunta Labay visited my brother who was sick in the hospital, she gave him the book Month of Mary. How happy I was reading that book! The episodes narrated made me desire to serve Our Lady, to imitate her and be loved by Jesus.

I was a student at the Philippines Normal College when my ardent desire to follow Jesus became intense. But due to this desire I neglected my studies and my grades went down. My father who was school superintendent for Nueva Ecija and Abra wanted me to become an educator like him. But I did not like teaching. I wanted to be a Sister-doctor, but because I am the eldest, there was no way for me to pursue a long and expensive course. It was during the last semester of my studies that I became serious in really looking for a congregation that could fit my talents and health. I wanted to try the Daughters of Charity, but I never had the chance to meet their superior at Santa Isabel.

Then somebody told me about the Daughters of St. Paul. I wrote to the superior and to my joy and surprise I received the answer to my letter and met Sr. Gaetanina Modenese. She told me to go to Dominga Street in Pasay, and gave me all the information I wanted to know. I also met two Daughters of St. Paul who were distributing books to families. I did not like their habit (dress for a religious Sister) but I liked their work.

A little later I decided to leave all and follow Jesus. But was greatly disappointed to find out through the marriage certificate of my parents that they were married in the Aglipayan Church. I confided my problem to three priests to whom I went for confession and spiritual direction: Msgr. Martin, Msgr. Jovellanos and Fr. Paulino. They helped me and on the fiftieth birthday of my father, my parents were married in the Catholic Church.

My next problem was how to get my parents’ permission to enter the convent. I knew it would be difficult. Fortunately, my friend Evangeline Fernandez, who wanted also to be a nun, helped me to prepare my things and I was able to escape.

November 27, 1950, the feast of the Miraculous Medal, was the date given to me to enter the Daughters of St. Paul in Lipa City. Sr. Paola Perez and Sr. Nazarena Silvestre accompanied me to Lipa. But fear seized me thinking of my parents whom I left without any word. For a week they looked for me in many convents in Manila but to no avail. A good soul recommended them to go to Lipa.

When Sr. Josefina Pormalejo saw my family, she ran and told Maestra Cleofe about it. When my mother saw me dressed in black, she fainted and I was scared to death. My father tried to pull me to the jeep where they rode. Maestra Cleofe, Sr. Josefina and another sister held my arm while my parents held on to my other arm. It was a tug-of-war. The only difference was that the players were all crying.

Maestra Cleofe said, “You cannot do this here because this is the house of God. If she likes to be a sister, so be it. God will take care of her here.” My mother was inconsolable. She cried, “Anak, bakit mo kami iniwan…” (Child, why did you leave us…) The sisters prepared some food for them but they refused the offer. I felt ashamed because of the scandal my mother did. I only felt relieved after my family left. From then on, they would come to see me every other week.

In the beginning of my aspirantship, I had d joy of teaching my elder sisters. I taught English, history and held Bible classes with them. The sisters were studious, faithful and punctual.

My formation years sailed on smoothly. My novice mistress was Sr. Redenta Commentucci, an Italian. When we made our first religious profession in Lipa on March 19, 1955, we were given another name. I chose Virginia Maria in honor of my mother, Virginia and my father, Mariano. Also, because 1955 was a Marian Year, all of us newly professed had “Maria” in our name. Our juniorate was smooth. On March 19, 1960, we made our perpetual profession.

After my various assignments in our communities in the Philippines, I was sent as a missionary to Jesselton, Borneo (now called Sabah). I returned to the Philippines in 1964, and was given assignments in the various fields of our apostolate. I became a diffuser, bookstore in-charge, receptionist, superior, radio script writer. I also worked in the Bible ministry with a priest.

Today, after my Golden Jubilee of religious profession on March 19, 2005, I am still available for any assignment I can do. I thank God for everything and I am happy to reminisce my youthful years.