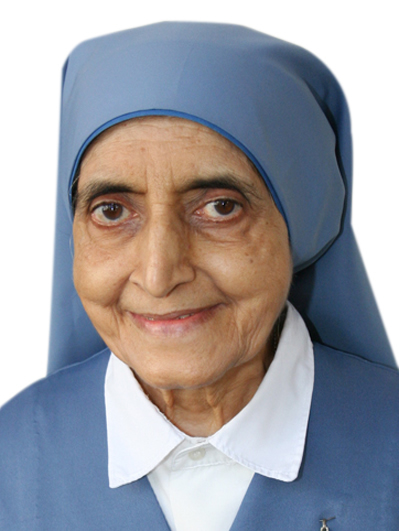 If I were not born in the Philippines, I guess I might not have become a nun. Environment played a very important role in our life. We were surrounded by Catholics, our friends were Catholics, and so we grew up just like any of them.

My parents were from India. My father worked for a certain company which opened a branch in the Philippines, so after marriage, he brought my mother here and they settled in Calamba. It was like an adventure for the newly-wed couple and they found life pleasant here. Among my parents’ acquaintances was a Spanish couple who encouraged them to be baptized. But my parents refused. However, when I was born, they did not refuse to have me baptized; the same with my brothers and sisters after me.

When we were young, we did not know much about our parents’ religion. They brought us once in a while to their temple in Manila, but they never obliged us to follow them. Instead they allowed us to assist at Holy Mass, attend catechism classes and join the church activities, just like the Catholic children in our town.

I guess they were happy doing that. They bought us new clothes and shoes for our first communion, we celebrated Christmas and Easter although they did not go to church. We never experienced any opposition or criticism from them. They were happy to us enjoying with other children. We brothers and sisters recited the rosary at home, and my parents would also be around.

Although my parents had told us about the Hindu culture, we were more inclined to be Catholics and Filipinos. The only thing my father told us girls was that we were not to marry Filipino boys. Then, when I was thirteen, he started to tell me about a “match” that he and another Hindu father were planning for me and the latter’s son. But I took it for granted. I was young then and had no interest yet for marriage. I did not know that he was serious about it. However, that match did not materialize, because I entered the convent. And my father was very sorry for that.

Ideas about nuns were not strange to me. I saw nuns in my town and, of course, the Daughters of St. Paul bringing books to the families. I was attracted to their work because they were bringing the Bible. Catholics were not allowed to read the Bible that time, but the Sisters were distributing them. So I said to myself, maybe I could do that work for God as an act of gratitude for the gift of faith I received.

When the time came for me to ask permission to enter the Convent, it was not only difficult, but was the beginning of a big trouble. Both my parents were violently against it. My father told me that it could be a great humiliation for him if I did not marry. Hindu fathers want to give all their daughters away in marriage. If a daughter does not marry, she will be suspected to have some physical defect or sickness, or worse, that her father must be too poor to afford the dowry. This would be a great humiliation for the family! My mother got very mad at me, but I had my own way. We stopped talking about it for some time. When I sensed that they had forgotten about it, I escaped. I asked to go to Manila to buy something but I went straight to the convent of Daughters of St. Paul in Pasay City.

I thank God that we had received such an abundant faith to be able to understand what it is to love God and be at his service. My brother became a seminarian. Of course, he was a boy so my father did not have to worry so much about his marriage as in the case of his daughters. They did not oppose his vocation although my brother did not persevere. Then my father returned to India with the intention of bringing over to the Philippines his family at a later date. But he was not successful; he became sick in India. Fortunately that time, I was also serving in India. So, I took care of him. Eventually he passed away there. But before his death, he was baptized by a Franciscan priest. What a grace! As for my mother, she died in the Philippines many years after my father, and she too was baptized before she died!

I am indeed grateful to God for His gracious goodness. I believe my parents are now enjoying their eternal reward in the presence of our heavenly Father. And I thank God for my parents, for their love and care, and above all, for their tolerance in allowing us to be baptized and brought up in the Catholic faith.