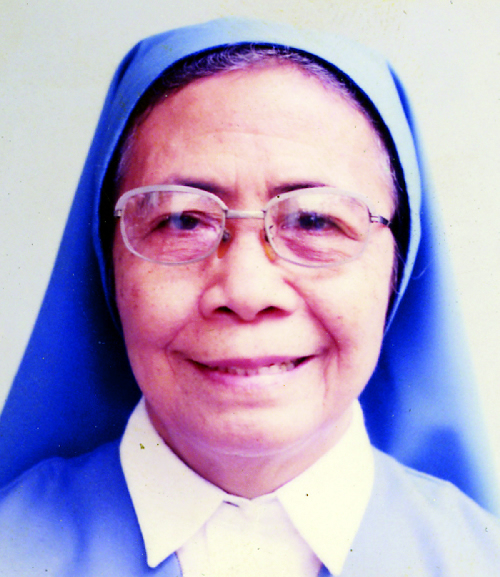 We are an Offering

Sr. Blesilda and Leticia Ganalon are blood sisters. They are among the first laborers of the Congregation in the Philippines. They entered at a time when there were more sacrifices to be made than privileges to be enjoyed. They considered themselves as an offering of their parents to God as they are the only children of a couple who died early. Both Sisters Bles (left) and Letty (right), in their seventies, celebrated their Golden Jubilee on June 28, 2003. Two weeks after her 79th birthday, however, Sr. Bles passed away on January 11, 2004, leaving behind Sr. Leticia, who remains zealous in her current apostolic assignment up until this day. Below is an interview with them by the Paulines magazine in April, 2002.

Paulines: Sisters Bles and Letty, can you share with us how you came to know the Daughters of St. Paul and entered the Convent?

Sr. Blesilda: When we were young, I was attracted to the Sisters who came often to visit us. One of them was my godmother who became an Augustinian Sister. But those visits were never favored by my mother. Whenever I told her that I wanted also to become a Sister, she would say, “Yes, you may, but only when your father and I would be dead.”

Sr. Leticia: I was not sure what I wanted when I was young, but when the proper time came, the Lord revealed it to me, and I am so happy that I followed the inspiration, although our parents never liked the idea.

Sr. Blesilda: But God has His way. He did it in such a way that no one would suffer the pains of our going away from home to enter the convent. Before we entered, our parents had already passed away; our mother in 1946 and our father in 1947. We were then left under the care of our uncle.

Sr. Leticia: I am sure God has willed it that way. If not, it could really have been very difficult for us to leave our parents. But we had the love of God instilled in our hearts; it was our parents who taught us to honor our God and to love the Blessed Virgin.

Sr. Blesilda: That’s very true. I remember that as early as seven years old we were already asked to wake up at five in the morning to pray. First, we prayed the rosary, then the Trisagio (prayer to the Holy Trinity), followed by so many other prayers to the saints, and also to the souls in Purgatory.

Sr. Leticia: We never complained about the long prayers. We obeyed our parents. God paved the way for us to follow Him by taking our parents to Himself, so that we could freely serve Him.

Paulines: Between the two of you, who entered first? How did it happen?

Sr. Leticia: I entered ahead of Sr. Bless. I went to Manila to work and study at the same time. Our cousin was working at St. Scholastica and she brought me there. Sr. Joaquina, one of the Benedictine sisters, was very good to me. Every afternoon, she would ask me to pray the Angelus with her at the grotto of Our Lady of Lourdes. At night, we would pray the rosary, and she would tell me stories about nuns. I was often her companion in visiting the hospitals. But I was not yet sure if I wanted religious life. I had a very close friend, a boy from the same town. We used to copy each other’s homework and he helped me in my assignments in biology and physics. When I left for Manila, we bade each other goodbye. When I told him that I might become a nun, he was shocked and cried. I controlled myself. But when I was inside the boat, I too began to cry, feeling very sorry for him and for myself.

One day, Sr. Maria Cleofe, a Daughter of St. Paul, came to St. Scholastica to look for vocations. I asked immediately about their mission and she told me they visit families, bringing books. All at once, I said, “No, Mother, I do not like that work, because it is too tiresome.” But she explained to me that every step is pleasing to God and the Guardian Angel is counting them and the reward will be great in heaven. Sr. Cleofe was so convincing and was all smiles while she spoke. Before leaving St. Scholastica, she told me she was going to pray for me. I am sure she did. I next thing I knew was I wanted to join them. After some time, she came again with another Sister, and I went with them willingly to Lipa.

Sr. Blesilda: Sr. Letty did not even tell me that she had entered the convent. I was just surprised when she sent me a letter asking for important documents. I asked my cousin who brought her letter from Manila why she needed those papers. Only then did I discover that she was already in the convent. 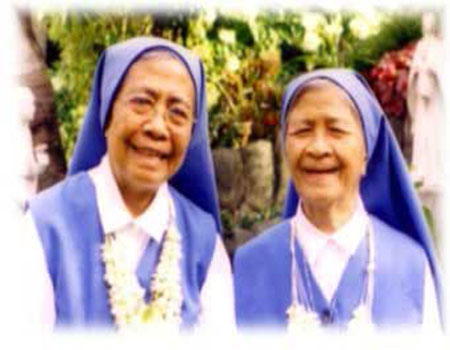 I decided that I must also enter. I prepared my papers in secret and asked permission from my uncle to go to Manila without telling him the real motive of my trip. He did not know that Letty has already entered the convent. Upon arrival, I requested my cousin to bring me to Lipa, to the convent of the Daughters of St. Paul.

When Letty and I saw each other, we embraced and cried! After a short greeting, the superior spoke to me alone. She asked if I wanted also to be a Sister. She said that I was already accepted!

Sr. Leticia: We made our novitiate together and we also made our religious profession together in June 1953.

Paulines: What were some of the interesting experiences you had after becoming a Sister?

Sr. Leticia: One time, we made a trip to Biliran Island. When we left Calubian, the sun was shining and the weather was fine. But when we were in the middle of the sea, it started to rain heavily, with strong wind. Our boat was being tossed up and down in the big waves, in danger of sinking. The captain came to me and said, “Sister, please throw down your boxes, we are sinking.” But I answered him strongly, “No, no, Captain. These books are food for the souls we will visit. Have faith in God and nothing will happen.” My companion, a postulant, was crying. I told her, “Don’t be afraid. Jesus is with us, just pray.” I prayed very hard and unexpectedly, the rain stopped and the winds calmed down. The captain came to me again, “Sister, I never saw such great faith. Many Sisters took this boat and they cried for fear, but you were of great faith. Lord, increase also my little faith!” I just smiled and thanked God from the bottom of my heart.

Paulines: Do you have any message for our youth today?

Sr. Blesilda: Today, many young people have no more faith. You must believe that God exists. Follow His Commandments. Life is too short to be wasted in doing things not pleasing to Him. Believe that God rewards the good in Heaven and punishes the wicked in Hell. He wants us to be saved because He loves us very much.

Sr. Leticia: We wish to invite young girls to join the religious life. The world is in need of your prayer, your work and your holy presence. God is very faithful. He will bless your sacrifices and make you happy here and in heaven.

Paulines: Thank you, Sisters Bles and Letty. You are truly an offering to God.